We have beautiful and functional facilities at Bethlehem, used by the congregation for all sorts of gatherings. We are also able to hire space to community groups that need a comfortable and inexpensive place to meet.

Both the church and the old school building and stables behind it are built of Mitcham bluestone, with 66cm thick walls and a 33 metre tower. A set of three bells for the tower arrived in Sydney in 1879 and were exhibited at the Sydney Exhibition where they won a first prize. Mysteriously, they never reached their destination in Adelaide – and the church still has no bells.

The sanctuary extension was constructed in 1961. It not only provides a beautiful liturgical focus, but also enhances the wonderful acoustics of the church.

For photos of the church please visit our gallery.

This complex was built in 1882. The ground floor was an open stables area with two school rooms above, divided by a central stairwell.

A school was established at the church in 1873. At first it was based in a room on the north end of the church that was converted into the chancel in 1961. By 1880 a new school of two rooms, known as Martin Luther School, was built across the northern end of the church block.

In 1917, together with all other Lutheran schools in SA, was closed by an act of parliament. In 1918 the youth of the congregation received approval to convert the two school rooms into a hall with a stage. This was formally named Excelsior Hall and opened in 1919.

The open arches of the ground floor area under Excelsior Hall were later enclosed to form a supper room and three Sunday School rooms. In 1963 the ground floor was completely renovated. The present name of this area, ‘The Stables’, reflects its original use.

Find out about "Lunch in the Stables", a fellowship event held once a month. 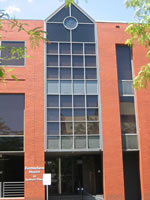 The church's offices, main meeting area and kitchen are in Bethlehem House, located at 12 Sudholz Place, opposite the church.

This building was dedicated in July 1989, following redevelopment of this area by the Adelaide City Council. 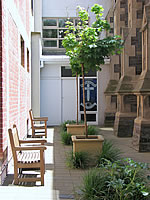 This landscaped garden is situated on the western side of the church building. Designed and established for the interment of cremated remains, it was dedicated on Easter Sunday 11 April 2004.

Members of Bethlehem are encouraged to reserve a site. The lease of a plot is for a term of 75 years and may be extended for a further period.

Bethlehem House and the Excelsior Hall & Stables area are both available for groups to book at a reasonable rate. For more information please contact the church office.