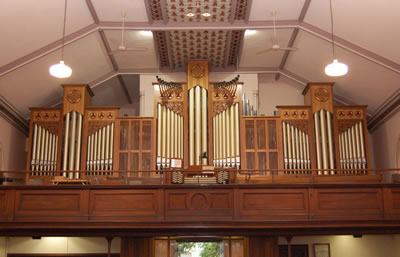 The Bethlehem pipe organ is one of the finest in Adelaide. It has been developed from a one-manual-and-pedal organ, built by Backmann of Berlin in about 1878. This organ had 350 pipes controlled by 6 stops. It was brought to Adelaide in 1883 by Prof I G Reimann when he returned from music studies in Germany.

In early 1889 this organ was installed in the gallery and dedicated at a special service on 26 June 1889.

In 1904-5 the organ was enlarged and placed in the front left-hand corner of the church – where the baptismal font now stands. At that time it was a two-manual and pedal organ with 963 pipes controlled by 19 stops.

In 1958 it was further enlarged and returned to the gallery. During this rebuild its action was changed from mechanical to an electro-pneumatic, three-manual and pedal organ.

Nearly 50 years later, in 2006, a complete rebuild was undertaken, with a solid state switching and coupling system, 55 stops and 2710 pipes.

The Principal Organist Gina Dutschke, was installed during a 9am Matins service on March 14, 2021. Pastor Stephen van der Hoek, Andrew Ampt and David Mibus have held the position of head organist. James Thiele who was the congregational organist from 1948 to 1997.