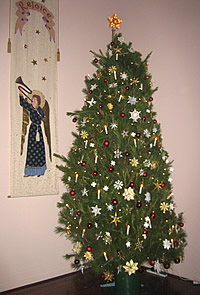 A fresh evergreen Christmas tree is a symbol of everlasting life. Legend has it that Martin Luther cut down a fresh fir tree after seeing the bright stars twinkling through the lofty pines. He took it home and decorated it with candles to recreate for his family the wonder of God’s creation.

The custom spread in Germany and then throughout the world. When Queen Victoria married the German Prince Albert, he brought the tradition to England in 1840. The first electric lights on Christmas trees were used in New York in the home of a friend of Thomas Edison in 1882.

Jesus is proclaimed in the Gospel as the ‘Light of the World’, so the lights on the tree serve to remind us of this.

The tree is decorated with white, gold and silver stars and red baubles. White, which refers to God’s purity and perfection, is the liturgical colour for Christmas. Gold and silver are a symbol of the glory and majesty of God, and red evokes the colour of blood, reminding us of Christ's death for us on the cross.

The star on the top of the tree represents the star that led the wise men to the baby Jesus. In the book of Revelation, Jesus calls himself 'the bright morning star'.